An online video of Cuban-American actress Jacqueline Guzman ranting against the funeral procession of slain NYPD officer Jason Rivera went viral, leading to her dismissal from the theatre where she had been performing.

After receiving widespread criticism online for the video she posted to TikTok on January 28, 2022, she has since removed it.

As the funeral procession blocked some streets in Lower Manhattan, she appeared incredibly disrespectful in her video. 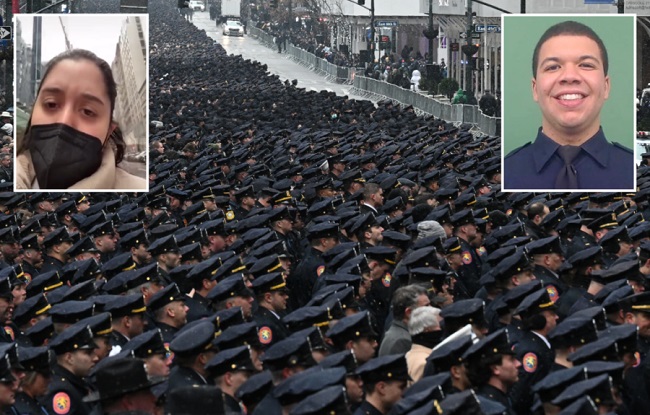 Guzman remarked in the TikTok video, “We do not need to shut down much of Lower Manhattan because one cop died for presumably executing his job improperly. Every day they senselessly murder young adults without provocation, and we don’t protect the city by closing down all businesses.

Actress Jacqueline Guzman was dismissed for making racist and sexist comments in a TikTok video about the New York Police Department.

Like this is f***ing insane,” she continued. To put it bluntly, this is ludicrous. Who knows if someone is having a heart attack nearby and doesn’t know it. Because one f***ing cop has the entire area shut off, no one can get to them.

Officer Rivera, 22 years old, was fatally shot on the job on January 24. The actress made the remark as policemen marched down the street in honour of the 22-year-old officer who “killed for presumably doing his job incorrectly.”

Users took to social media to express their displeasure with Guzman’s insensitive remarks, and the resulting backlash ultimately led her to remove her accounts.

“@RetiredNYCPD,” tweeted one user. It’s tragic that some people can’t even muster sympathy for the bereaved after the murder of a loved one. I think it’s wonderful that New York City is throwing a memorial service for this police officer. Hopefully, peace and order may be reestablished. I pray that God would bless every police officer.

Face To Face Films, an independent film business based in New York City, also fired her. Face To Face Films issued a statement on their official Facebook page confirming that Jacqueline is not affiliated with the company.

An inappropriate film featuring one of our own, Jacqueline Guzman, was recently brought to Face to Face Films’ attention. The comments made concerning Officer Rivera’s death are unacceptable, and Face To Face Films does not back them. Therefore, she is no longer an employee of our firm.

In Other Words, Who is this Jacqueline Guzman Character?

Although her former internet presence has been scrubbed clean, her updated profile on the Face To Face Films website reveals that she is a native of Hialeah, Florida, currently living in New York City. She discovered her love of performing while still a high school student.

Her friends pressured her into trying out for the “Almost Maine” drama. In New York, Jacqueline Guzman finished her education at the American Academy of Dramatic Arts.

The actress’s account on the video-sharing app TikTok has been suspended or she may have erased it after the event. At the moment, Guzman is all over the internet for being a disgraced actress.