Home Gaming What is More Popular Fortnite or Minecraft

Epic Games is currently in a bit of a pickle. Since the push for the epic game shop and the incredibly poorly accepted moves they’ve made there, the company’s been in a hole and it shows in the quality of their products.

The Epic Games Store is disorganised, and Fortnite frequently experiences issues with server stability, crashing, and other similar issues. Unpredictability is largely responsible for its widespread fame. Let’s contrast this with Microsoft’s Minecraft. 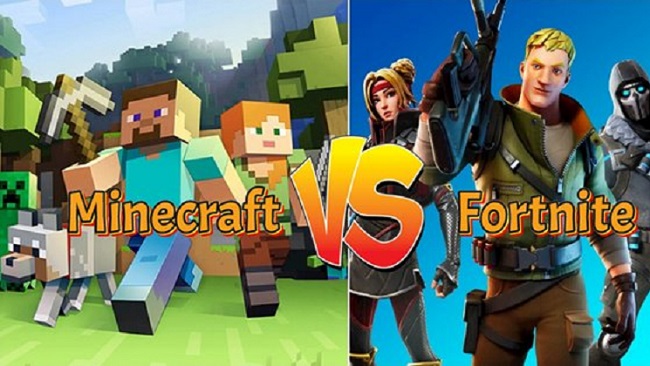 It’s true that every Monday there’s a Minecraft tournament, but it’s just for fun. Even though Epic Games has been marketing Fortnite as a casual game, it’s become abundantly evident to everyone on the planet that it is everything but.

If we look only at the creative modes, we can see that Fortnite and Minecraft have a lot in common. Despite Fortnite’s later transformation into a creative tool, Minecraft remains the superior choice because it was made with creativity in mind from the start.

These games couldn’t be more different, but if you’re not a fierce competitor, you probably shouldn’t waste your time with Fortnite. This is a huge reason why Minecraft is so popular.

Whenever I try to play Fortnite, the game is either experiencing server issues or a bug. Okay, but what about Minecraft? Consider the extensive history of Minecraft and how long it has been available.

When was the last time you encountered a truly significant issue in Minecraft? I’m not claiming that the game’s technical aspects are without flaws, but I doubt you’ve ever encountered anything too serious.

What I’m trying to argue, though, is that it’s much more reliable than Fortnite, and that people remember things like that. For example, suppose you wanted to play a fun, creative game but you had two options, one of which was always consistent while the other seemed quite erratic and its features were constantly turned on and off. You’d probably choose option two.

In Contrast to Popular Belief, Minecraft is not a Pendulum Game.

They can tell when they’re being pandered to, and Fortnite’s players aren’t stupid. Everything related to Fortnite is incredibly egocentric, including the toys, clothing, dances, and ads.

When trying to draw in new players, you don’t want your marketing materials for Fornite to come across as aggressive to anyone who aren’t already fans of the game. Even someone who has never heard of Minecraft before being exposed to promotional materials would likely be intrigued.

But if they didn’t know anything about fortnite and they saw the promo stuff in the fan base surrounding it. It would definitely pull back a little bit from it. On the one hand, they wouldn’t be interested in giving it a shot because of the game’s reputation for being overly competitive.

Most of your admirers enjoy it and it makes them want to be part of it. However, it may cause others who aren’t a part of that group to feel distant and uninterested.

Fortnite’s economic model seems very sound to me, and I don’t see any issues with the microtransactions in the context of modern gaming. Microtransactions, in the form of cosmetic upgrades like character skins, weapon skins, and so on, are still heavily featured.

During gameplay, each one is on display for the player. Let’s draw a parallel with the microtransaction system in Minecraft, which not everyone like. We can both agree that they are far less annoying than Fortnite’s.

If you’re determined to play Minecraft without spending any cash, the game is likely to never show you any in-app purchases at all. However, if you want to play Fortnite without spending any money, you will continually be bombarded with in-game advertisements to purchase Fortnite Battle Royale.

I’ll be honest, mods can add years to the life of a game. Just look at games like GTA 5, fallout 4, skyrim witcher 3, and many more. These are all games that have a relatively limited shelf life on paper. They’re still among the most played titles on the system.

A game like Minecraft, which has a sizable Modding community and seemingly constant updates thanks to modded add-ons, fits this description. The mods people are creating for minecraft are quite great and they’ve brought a tonne of shelf life to the game additionally Since minecraft shelf life was already fairly unlimited as it was.

With time, the modders’ community will only continue to expand. Adding some mods to Fortnite would be a nice touch.

It’s growing harder and harder to play Fortnite on a casual basis. A lot of people think that Fortnite as a casual game is dead and buried. The impact this has on me is complicated. My point is that despite widespread enthusiasm for multiplayer competition, the vast majority of gamers themselves do not enjoy this type of gaming experience.

When compared to the best-selling games of all time, Fortnite’s player base of tens of millions pales in comparison to the total number of individuals who have played such titles. There is a good reason why none of them are competitive multiplayer games despite the popularity of such titles.

If you compare them to casual games, they’re a much smaller slice of the pie. Games for one player and tools for individual expression like Minecraft and Roblox. There are games designed for competitive play, and they exist, such as Fortnite. Fortnite may not top the list of games people turn to when they want to unwind. However, many would rank Minecraft towards the top.

I touched on this briefly before, but I want to emphasise it again again. Fortnite’s promotion is very high intensity, bright, explosive, loud, and in-your-face to capitalise on the excitement culture around the game.

In contrast, the marketing for Minecraft is as chill as the game itself. Now if you’re an average individual seeking for a creative game Choose one of these two new positions based on your promotion.

Minecraft, because if there’s one thing gamers despise, it’s being told they should be enthusiastic about something they aren’t. Instead of waiting for anything exciting to happen, Minecraft encourages players to create their own.

There’s a chance that Minecraft will eventually surpass Fortnite. Although Fortnite was clearly the most popular game last year, Minecraft has made a strong drive in the previous several months to reclaim its former position as the most played game.

For that reason, I’ll defer to your judgement and ask, which do you prefer, Minecraft or Fortnite?