If you’re anything like me, you’ve had the unfortunate experience of chopping onions in the kitchen when unexpected guests arrived.

What exactly causes onions to have that one-of-a-kind odour? 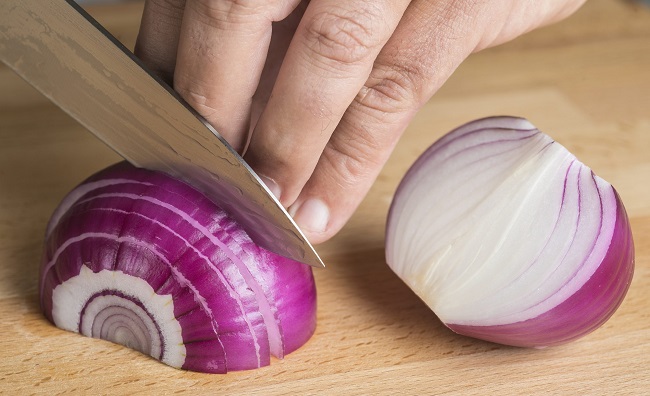 Once my visitors had gone, sneezing and wiping their eyes, I decided to put an end to the debate.

My chemical professor son-in-law was the one I called, and his explanation of onions blew my mind.

What is it about Onions that Makes them so Pungent?

The enzyme alliinase is responsible for the strong onion odour by converting the sulfur-containing acid propenylsuplhenic acid into lachrymatory-factor synthase and thiosulfinate.

Alliinase is responsible for the sulphurous odour that onions have.

Many health advantages can be attributed to alliinase, the enzyme responsible for the odour.

There is a particular odour associated with onions that is reminiscent of a cross between a tar pit and a hard-boiled egg.

The strong odour of onions might irritate the mucous membranes of the mouth, nose, and eyes.

In other words, you’re not just smelling onions; you’re actually tasting them.

The sulfur-rich propenylsulphenic acid in onions is degraded by the enzyme alliinase, releasing the onion’s characteristic odour.

This aroma is concentrated in the onion juices, therefore chopping onions or garlic leaves a lasting impression on the skin.

Why Onions Smell More When Cutting

I was quite surprised while chatting to my son-in-law as to why just the onions I was cutting had the horrible onion smell but the ones that still had their skins on were pretty mild smelling.

The only difference between the fresh ones and the ones that had started to stink was that I had cut the stinky ones. What made them distinct enough to stink while the other onions were silently minding their own smell-business?

So, my brilliant science professor son-in-law has answers to this too. It seems that during the conversion of sulphur by the alliinase enzyme, a sulfuric gas is generated.

Exposure to air causes this change in onion flesh.

When I chopped the onion, I released the pungent syn-propanethial-s-oxide gas that forms when air enters the cells of an onion.

How to Reduce the Strong Odor of Onions

Next, I wanted to know what to do about the gas escaping, so that my kitchen would continue to smell pleasant and not like a sulphurous swamp.

The pungent odour of onions can be mitigated in a few surprising ways.

To significantly reduce the release of sulphur gas, place your unsliced onion in the freezer for 10-20 minutes before slicing.

For the most part, heat or room temperature is required for chemical reactions to take place (at the most basic level of chemistry).

The chemical reactions would be slowed by the cold. Consequently, the alliinase reaction to produce the gas is halted by low temperatures.

Peel the Onion Skins and Discard the Roots

Cutting off the root end of the onion before peeling and slicing it is another fantastic approach to lessen the odour.

To contain the onion odour, put this piece of the onion in a sealed bag or container. The majority of the onion’s sulphur compounds are located at its base.

To lessen their pungent odour, you can also wash, peel under running water, rinse, and then slice onions.

The water will create a seal between the onion cells and the air, limiting the emission of sulfuric gas.

Three Techniques for Disinfecting Hands After Working with Onions

In addition to having a strong odour, onion juices also taste and feel strongly of onions. When slicing onions, your hands will take on that distinct odour that can only be described as “onion.” It may be difficult to eliminate it.

Method 1: a Salt and Soap Scrub

You can get rid of the odour of onions by mixing equal quantities of liquid soap and salt and scrubbing your hands with the mixture for at least one minute.

Your hands should no longer smell like onions and be velvety smooth.

To get rid of the odour of onions on your skin, try using vinegar or lime juice instead of pool acid.

To use, simply pour some of these acidic liquids into your hands and scrub hard for a minute before washing.

For the last resort, you can rub your hands together using a stainless steel spoon or bar while running water.

This will help eliminate the onion scent. The sulphur that gives onions their pungent odour can be removed from stainless steel.

Although I have always enjoyed onions, I now take extra care to freeze them before peeling and chopping them.

To further conceal the onion’s root part and lessen its odour, I always have a plastic container on standby.

After implementing these measures, the onion odour in my house has been greatly reduced.

While I’m preparing the supper, I’ll gladly welcome my guests into my home.