Home Entertainment Was Saltbox Hamptons. Now Its Something

The property dates back to the 1680s, making it one of the oldest in the area. To give the house a classic New England architectural style, it has two storeys up front and one level down back, giving it a steeply sloping roof typical of the period. 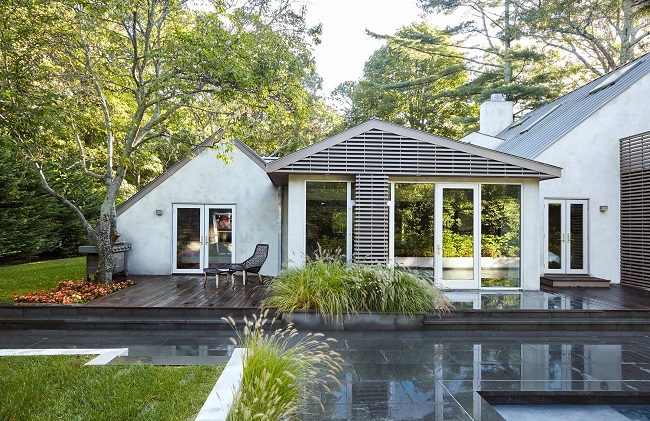 David Mulford, who owned the property at the time, dubbed it Congress Hall, and it still sits in the centre of the old village, overlooking the green. Mulford used the facility as a meeting place for males in the area to discuss politics.

An updated listing by Enzo Moribito for $4.495 million revealed that the 5,500-square-foot East Hampton property had just been purchased by 80s runway photographer Don Ashby in 2015.

Five marble-clad baths and a Boffi-designed kitchen with stackable folding doors that open to expose an L-shaped swimming pool that encircles the dining area were installed in 177 Main Street as part of this renovation.

Getting to Know The Area

The Hamptons are most known for its stunning beaches surrounded by opulent mansions, natural dunes, and flocks of gulls. Even though the summer months are the apparent time of year to head down to the beach, a crisp sea breeze on a spring or fall day with only a handful of dog walkers and joggers to contend with is an experience that is hard to beat.

Main Beach in East Hampton, as well as Flying Point Beach in Southampton, are two of the best options in terms of accessibility and local popularity. You can stroll for kilometres in any direction across the sandy expanse, enjoying a near-private tour of locations popular with people during the high season, for a minor parking fee (typically avoided in the off-season).

The Off-Season is a Particularly Active Time For the Arts.

Many artists sought refuge in the Hamptons throughout the mid-20th century, including Jackson Pollack and his wife Lee Krasner. The Pollack-Krasner House in East Hampton, New York, is open to the public until the beginning of November, after which time it will be closed until May. Splattered paint may still be found on the floor.