S. Pozdniakova, whose father was a four-time Olympic champion, continued the family’s winning ways in the women’s sabre event at the Tokyo 2020 Games.

Pozdniakova made her first appearance on the world stage in 2017, and she has since won two gold medals. 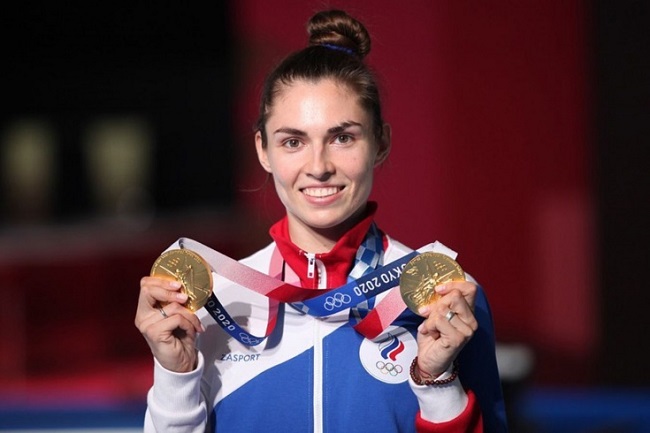 An individual gold from the World Championships in Wuxi would have been the most coveted of those medals until an Olympic gold was won.

Fencing runs in Pozdniakova’s family; both of her parents were Olympians in the sport.

Her father, Stanislav, won the sabre event at the Olympics four times, the world championship ten times, and the European title thirteen times.

With a thrilling 15-11 victory over fellow countrywoman and three-time Olympic medalist Sofya Velikaya.

After coming up short in the finals in the 2012 London Olympics and the 2016 Rio Olympics, Velikaya is eager to finally win her first individual gold.

Pozdniakova, in her first Olympic game, gave Velikaya a good fight till the very end.

Pozdniakova has overcome adversity on the field twice (in 2013 and 2018) after suffering a career-threatening injury (a torn ligament).

Her famous saber-fencing father, Stanislav Pozdniakov, also happens to be a government official.

The 47-year-old has won four Olympic medals, including two golds (one as an individual and one with the men’s team in 1996 in Atlanta). A

By winning the sabre fencing event on Monday, S. Pozdniakova followed in her father’s footsteps as an Olympic gold medalist.

Russia at the Tokyo Games is known by the name of its Olympic governing body, the Russian Olympic Committee.

S. Pozdniakova father, is the president of the ROC and a four-time gold medalist in fencing.

Her finals opponent, Sofya Velikaya, is also a member of the ROC bureaucracy. She is in charge of the team of athletes.

At 10-10, S. Pozdniakova finally broke through, her lead signalled by increasingly jubilant cheers.

After she had secured the victory, she got down on one knee and hugged Velikaya. They bowed together in front of their teammates and fellow sportsmen, holding hands.