He currently resides in Brisbane, Australia, where he works as a UNICEF ambassador and speaks to audiences to inspire them.

Taufatofua gained widespread recognition after he carried the Tongan flag at the opening ceremony of the 2016 Summer Olympics in Rio de Janeiro, Brazil. 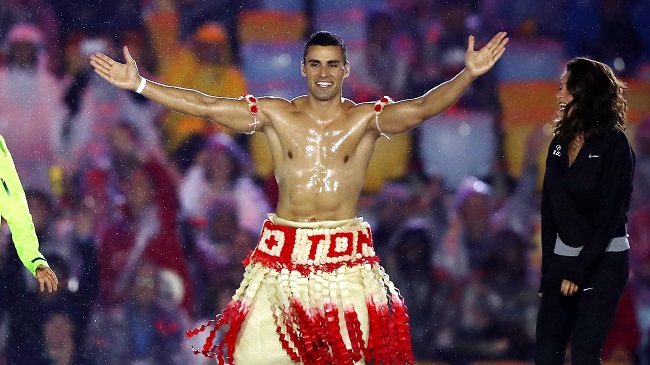 While wearing a traditional Tongan taovala wrapped around his waist and with his chest bared and oiled.

He then served as flag bearer again for the 2018 Winter Olympics and will again in 2020 for the Summer Games.

P. Taufatofua Raises Spirits Again Even in the Face of Tokyo 2020 Loss

A second opportunity at the men’s +80kg taekwondo tournament didn’t help the “Shirtless Tongan,” who lost to a Slovenian competitor.

P. Taufatofua of Tonga, who competed in the repechage round of the men’s +80kg division at the Tokyo 2020 Olympics.

Was a very enthusiastic and well-dressed competitor, although he was ultimately eliminated.

The Tongan was given a second chance after losing badly against the event’s top seed, Vladislav Larkin, in the round of 16. Larkin had gone on to win the entire competition.

The Tongan faced up against the Slovenian, Ivan Konrad Trajkovic, just days after going viral for the third time at an Olympic Opening Ceremony thanks to his oiled up abs.

However, the Slovenian was too strong for Taufatofua, who was knocked out with a four-point kick to the head in the first round.

Trajkovic scored almost twenty points, more than enough to win by point margin and secure his spot in a bronze medal contest, but the fight was stopped before the third round.

The man who became known as the “Shirtless Tongan” maintained his Olympic battling spirit right up until the end, when he conceded defeat with a grin as wide as the Pacific Ocean.

The much-anticipated opening ceremony of the Tokyo Olympics eventually took place on Friday, after being postponed due to the coronavirus outbreak.

Again at the Parade of Nations, Tonga’s oiled-up and naked flag bearer made an impressive entrance.

The Internet was once again thrilled by the sight of P. Taufatofua, who had previously marched in traditional Tongan garb.

Fans who had been anxiously awaiting the start of the Olympics were relieved to see the venue come into view.

Images of the ecstatic Tongan athlete were sent out by the Olympics’ official account. He has stuck to the same routine for many years because, as the saying goes, “if it ain’t broke, don’t repair it.”

P. Taufatofua, a famous Tongan athlete, has decided to stay in Tonga and focus on disaster relief rather than compete in the upcoming Olympic Games in Beijing.

In January, a Tsunami struck areas of Tonga after a volcano erupted only 40 miles distant.