It takes speed to compete in the Olympic Games for runners. Incredibly rapid, against overwhelming odds.

After making a huge comeback in a qualification race over the weekend, Dutchwoman Sifan Hassan gave a masterclass to viewers at home.

Even though she didn’t win a medal, beating 11 of the world’s fastest runners after practically falling behind is outstanding in and of itself. 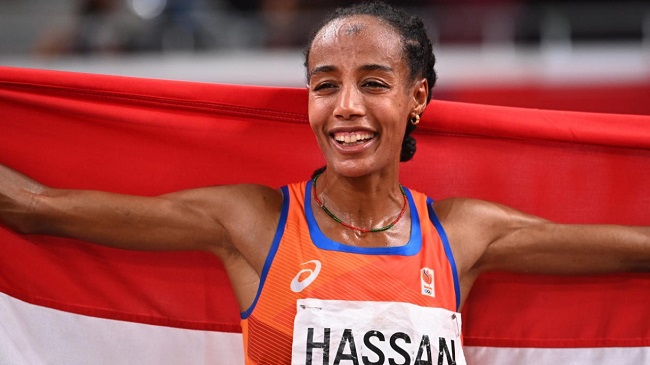 An Olympic Runner Fell During The Last Lap Of The 1,500. She Still Won The Race

On the final lap of the 1,500 metres, an Olympic runner collapsed. Even so, she came out on top.

Sifan Hassan, a Dutch distance runner, was on the penultimate lap of her 1,500-meter heat when the runner in front of her stumbled and knocked Hassan to the ground.

She was trailing the front-runners when all of a sudden she got to her feet and stepped on the accelerator.

She had to beat eleven of the world’s fastest runners to win. She had incredible momentum, and she blew right by everyone of them.

Hassan made up for his slow start in the final stretch by charging past the leading five competitors. She was the victor in this competition.

Hassan, now 28 years old, will be racing in the 1,500-meter semi-finals on Wednesday.

She came to the Olympics hoping to break a record by becoming the first person, male or female, to win gold in the 1,500-, 5,000-, and 10,000-meter events all in the same Olympic competition.

Because of her miraculous achievement on Monday (local time), she is still on schedule.

The Olympic Games never fail to deliver a plethora of unforgettable experiences, whether they inspire, delight, or simply drop jaws.

Don’t bother continuing if you find that trite. Despite this, know that you’re missing out on a very enchanting and perfect moment from the Tokyo Olympics.

Sifan Hassan, a Dutch athlete, came into these Games with the goal of becoming the first woman in Olympic history to win three consecutive individual gold medals in the same event.

However, on Monday during her 1500-meter heat, Hassan tripped and fell to the ground, seemingly ending her chances of winning all three.

To be expected of the reigning world champion in the 1500 and 10,000 metres and bronze medalist in the 5000 metres at the global championships, she rose to her feet.

After some time, she felt better. Brilliantly. Then she found and defeated everyone who had died while she was on the ground.

On Monday, world champion Sifan Hassan nearly had her hopes of winning the distance treble at the Olympics dashed.

When she tripped over another competitor and fell at the final bell of her 1,500-meter heat. Unbelievably, she came out on top in the end.

Hassan made an unsuccessful attempt to leap over Kenya’s Edinah Jebitok, who fell just in front of her as the runners began the final lap in a flurry of activity.