Home Review AR-10 Bipods – What Should You Know?

One of the most critical aspects of a precise and accurate shot is a firm rest. A strong and versatile bipod is an ideal alternative to a shooting bench when one is not available. When you consider their field adaptability, you’ve got yourself a must-have AR-10 attachment.

What to Know When Buying an AR-10 Bipod

Before selecting the best bipod for AR10 rifle, any discriminating shooter should weigh all of their possibilities. A bipod attaches to a rifle and serves as the link between the shooter and the firing platform. Here are some things to consider.

Not every rifle will work well with every bipod. Assuming that all bipods are made equal is a beginner error. To get the most out of connecting a bipod to an AR-10 rifle, you need to locate the optimum match for your gun. 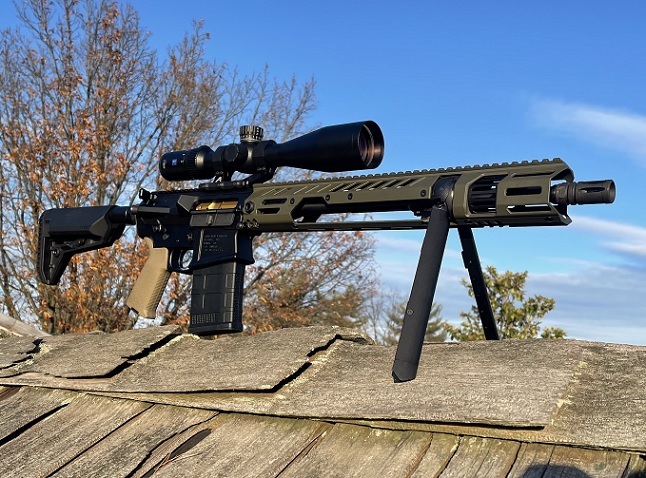 Bipods come in a variety of sizes and weights, from barebones and lightweight models excellent for storing in your range bag just in case to robust and heavyweight feature-packed versions that can withstand whatever a shooter or operator can throw at them.

Getting the Lay of the Land

Bipods appear to be straightforward to operate, and they are for the most part. Practicing the act of deploying your bipod, on the other hand, should not be overlooked. Take your time learning how to use all of the capabilities on your selected AR-10 bipod. This is especially true if the bipod you choose includes premium features like adjustable legs, tilt, and locking mechanisms.

We add attachments to our AR-10 rifles for a variety of reasons, one of which is that they make them appear cooler. There’s nothing wrong with wanting your AR-10 to seem tactical and tough, and a bipod may help you achieve that goal. As a result, paying attention to the finish of a bipod you’re contemplating should be a component of your research.

We’ve all seen that automobile or truck on the road with one door that is a different color than the others. It looks plain horrible and there is no concealing it. There’s no reason to settle for a bipod that doesn’t compliment your AR-10 properly or in the way you desire with so many alternatives available.

While there are several choices available on the market, metal composites, particularly aluminum-based bipods, are the most popular.

Whatever the case may be, a bipod must be tough enough to survive everyday usage as well as the recoil of your AR-10. The 7.62-caliber ammo used in the AR-10 gives a lot of jerk back. Aside from that, the bipod should be as light as possible.

The AR-10 is commonly used for large game hunting, which requires a significant amount of walking. A light bipod guarantees that your rifle does not contribute too much weight, allowing you to avoid utilizing a bipod.

The majority of AR-10s have a Picatinny rail platform, although others have traditional handguards. An excellent bipod should be ready to use right out of the box and have a tight fit with the mounting platform.

Although several adapters and other mounting alternatives are available, ready-to-use equipment is the best option. QD mounts are superior to ones that need screws and lugs to install.

To alter your aim fast, a decent bipod must be able to pan and cant via the axis/mounting point.

The pan and cant capabilities allow the shooter to steadily shift the aim without the gun swaying too much. When you’re hunting tiny game, this also saves you time.

The majority of bipods have adjustable heights ranging from 3-9 inches to 25-62 inches (like camera bipods). Before deciding on one, consider your intended use and personal preferences.

However, a bipod with adjustable height is required. An additional sling mount will aid in the attachment of slings to the rifle.

The ability to lock the legs or tilt the position is a very practical and helpful function. It aids in the more stable operation of your AR-10.

Even if you shoot rapid-fire shots at vast distances, you don’t have to sacrifice steadiness. The majority of locking bipods are extremely easy to lock and unlock in case you need to change the angle or height.

Some bipods have a feature that allows you to freeze at a specific height. Even if you’re in a rush, you can effortlessly maintain your preferred height with the aid of this function.

Why Should You Get a Bipod?

Regardless of the surface, your rifle’s steadiness will improve by up to a factor of ten. A bipod’s robust adjustable legs may be modified to offer a leveled shooting platform depending on the uneven surface.

If you’re out in the woods and want to rest your rifle, a bipod will be a better option than laying it on your legs or on rocks. The stock of your rifle may be destroyed if you lay it on such surfaces.

The efficiency of a shooter rises because a bipod removes a significant amount of weight off the shooter’s shoulders. A bipod will also improve the accuracy and performance of a long-range rifle such as the AR-10.

A bipod will give you features like rotating swivel, canting, and quick panning.

This function allows you to make modifications without having to leave your current location. When shooting at moving targets, this ability will come in handy.

Also, after you’ve completely set up your bipod, it takes the fewest changes. This will allow you to concentrate more on your target audience.

A bipod may also be used to fire comfortably in a prone posture without the use of base support such as duffel bags or the range.