Home Entertainment An Unpopular Answer to the Mystery of American Obesity

Knowing what it means to be overweight is the first step in grasping the scope of the obesity problem in the United States. Medical professionals and dietitians typically divide patients into four categories: underweight, healthy, overweight, and obese.

Body mass index (BMI), a measurement of body fat based on height and weight, is used to categorised people into these groups. If you’re 5 feet and 9 inches tall, you can obtain a rough idea using the CDC’s handy chart. 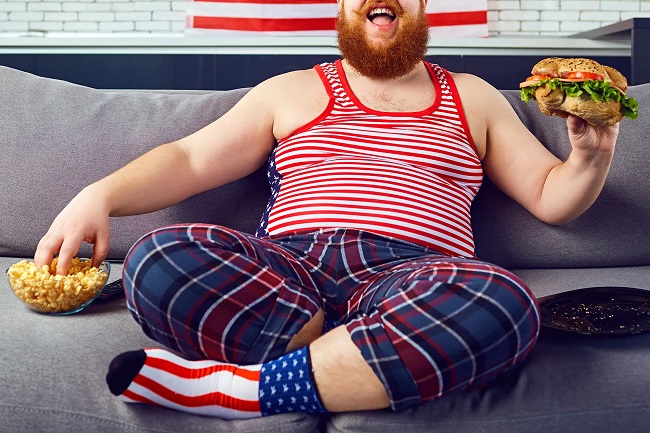 No conclusive conclusions can be drawn about the causes of America’s persistent obesity epidemic.

Although there are numerous hypotheses floating about, the overwhelming evidence points to the two factors that the general public already suspects: excessive dietary intake and insufficient physical activity.

According to the USDA, the average American’s calorie intake increased by over 20% between 1983 and 2000, largely as a result of an increase in meat eating.

When compared to the average of 138 pounds consumed by each American in the 1950s, the average annual consumption of meat in the United States is now 195 pounds.

A spike in fast food sales has been linked to an increase in body mass index, according to the World Health Organization, and Americans are infamous for their fast food intake, accounting for around 11% of the average American diet.

Once again, scientific evidence shows that the added sugars in soda and energy drinks are having a devastating effect on American health and wellness. What we eat is just as important as how much we eat.

The complexity and importance of diet in the U.S. obesity epidemic cannot be overstated. There is a great deal of confusion among consumers about what they should eat and how much of it.

Fast, inexpensive, satisfying, and delicious larger quantities, processed packaged food, and drive-thru meals are marketed in a way that is almost quintessentially American. However, each year, Americans shell out over $20 billion on weight loss products and services. These include anything from diet books and medications to drastic measures like lap-band and liposuction.

Considering that most of us spend more time in the office and less time cooking than our parents did, it’s no surprise that we’re always on the lookout for quick fixes. Irony be damned, there are days when all you can manage to bring for lunch is a slice of pizza and a slim-fast.

This bipolar eating behaviour can be easily explained by cunning advertising campaigns. The U.S. diet industry expanded rapidly, becoming more sophisticated as the nation’s growing waistlines were caused by decades of soda and TV dinners.

Popular nutrition advice and diet fads have come and gone as rapidly as the Arch Deluxe and the McRib since the 1970s. Fat was our main nemesis in the ’90s.

There was a huge demand for low-fat and fat-free options in grocery stores. Years of experience taught us that if anything claims to be healthy and delicious without any added fat, it’s probably not what it seems.

Turns out, instead of using real meat as filler in their low-fat goods, most food manufacturers instead used sugar and hydrogenated oils as replacements.

Trans-fats, which are abundant in hydrogenated oils since they are reformed vegetable oils, are incredibly nasty because they increase the risk of heart disease, stroke, and diabetes. Though not as dangerous as refined sugar, added sugar can nevertheless cause serious health problems if consumed regularly.

Although sugar has few calories per gram, eating it in large amounts can cause spikes in insulin and energy levels, which can lead to weight gain and even diabetes, despite the fact that sugar itself has few calories.

Not getting enough physical activity is also a big factor in the rise of obesity. Much Americans no longer spend their days labouring in fields or factories; instead, they spend most of their time sitting at desks. This involves fewer daily physical activities.

Compared to 50% in 1960, only 20% of employment today need at least moderate physical exercise, according to a recent survey.

According to other studies, Americans today consume 120-140 less calories per day than they did 50 years ago. Combine it with the increased caloric intake, and you have the ideal conditions for gaining weight.

Yet, the effects of lethargy are felt in settings other than the workplace as well. It’s how we go to and from work, and what we do when we’re done. More than in any other industrialised nation, Americans prefer to sit comfortably in their cars rather than walk. The Centers for Disease Control and Prevention report that 80% of U.S. adults don’t get enough physical activity.

The consequences of smoking during pregnancy and maternal obesity are just two of the hypothesised contributors to the current obesity crisis. A child’s long-term risk of obesity may also be affected by factors such as inadequate sleep, stress, and a decrease in the prevalence of breastfeeding.

These are not the sole or even primary causes of obesity, but they are strong indicators of the systemic healthcare failings that constitute a major part in this epidemic.

Finally, the big picture must not be forgotten. People have been quick to point fingers at specific foods—meat, dairy, wheat, fat, sugar, etc.—for their weight gain throughout the years, but the underlying cause of obesity is much more straightforward.

Although genetics and age do have a role in metabolism, the Centers for Disease Control and Prevention (CDC) emphasise that the primary factor in determining weight gain or loss is the ratio of calories consumed to calories expended.